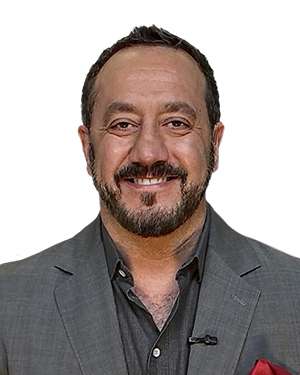 Bob Iaccino has spent nearly three decades in the markets trading commodities, futures, forex and equities. He got his start on the floor of the Chicago Mercantile Exchange. He went on to Smith Barney, Germany’s Commerzbank, and soon became a chief market strategist and risk manager. Bob ran his own commodity pool, invested in a fund of funds as a principal and member of the investment committee and later worked for a boutique oil-trading firm. In 2015, Bob and his partner Mike Arnold founded Path Trading Partners. Bob and Mike launched the Stock Think Tank to help investors learn how to properly balance risk and reward in their personal stock portfolios.

I’m an immigrant kid. My parents are both immigrants. I’m the first generation born here. I spoke Italian before I spoke English until I was five.

We had a family business growing up. My father was a bread truck driver and he ended up buying his own bakery. Growing up, starting from the age of about 14, I worked at that bakery. Summers, after school, and I developed that work ethic that comes from a family business. It wasn’t a matter of if you were going to work. You went to work. I still work that way now.

I worked at the bakery through high school and college. In 1993 my father had taken on some partners to expand the business. Those partners teamed up with a silent partner who happened to be my uncle, and they threw my father out of the business. Obviously, my whole family walked out.

Now, I like to point out today that three years later the business was bankrupt. But my whole family walked out and I for the first time ever found myself with no work, ever, since I was like 14 years old. I was 26, 27 years old at the time, and no job.

A friend said to me, “Why don’t you come down to the Chicago Mercantile Exchange with me and work there?”

I had never heard of it. I thought we were going to the Merchandise Mart. When he said the Mercantile Exchange I’m like, “All right, I guess he works at a place where they sell furniture. I don’t know.” But I had nothing else to do. I was unemployed. So I said, “Yeah, I’ll go hang out with you.”

When I walked out onto the trading floor, it’s the first time I’d ever seen it. I was blown away. You might remember the movie with Eddie Murphy and Dan Aykroyd, Trading Places, where they play traders in the pit there in Chicago, with the old-school open outcry and the chaos. That movie came out about 10 years earlier, in 1983.

Actually, the movie for a long time was confusing to me — until I got involved in trading. What a lot of people don’t understand about Trading Places, was how, toward the end they were able to sell and make money and then turn around and make even more money buying. It can be very confusing if you don’t understand how markets work

This was the Chicago pits. I walked down there, loved it, and went back the next day.

I walked out on the trading floor for the second day and just basically asked anyone who would say “Hi” to me for a job. The very last guy that I asked offered me a job at $500 a month. I said yes because it was the only one I was going to get, and I wanted to be there.

The yelling and screaming in the pits was the closest thing that a 5’9″ Italian guy could get to playing sports for a living. It was just screaming and yelling. There was fighting, sweating and cussing, and then we’d all go to have a beer together at the end of the day. There’s actually a documentary, done by PBS. You can find it on YouTube, called “Open Outcry.” Watch the first few minutes and you’ll see me.

Within three years I was an assistant technical strategist, and a year from then I was the chief market strategist. It really took me about four and a half years to get to that point, which was like a meteoric rise, really, for that period of time.

Then I decided to trade on my own. A few years later I lost nine figures in less than eight months.

I was trading yen, interest rates and options. I had the ability to go around and trade whatever I wanted on that trading floor. I didn’t do any hard commodities, any gold, or silver, any agriculturals. It was all financial stuff, equities.

And those losses were exactly where I learned the core of what it is that we do now. I learned that risk was paramount to everything.

I knew my trading theories were correct. What I didn’t know was that the market is never incorrect. I would continue to add to positions where I knew I was right until they blew me up, until I lost way more money than I had mentally allocated in the first place. I found myself more attached to my trading thesis than my own money.

The example I always give, and this is a true story because I did this, was a place on Wacker and Madison across from the exchange called Mangino’s. They had really good sandwiches. I used to eat there almost every day. Lunch at Mangino’s was about $9 to $11, depending on which sandwich you got.

I started off by saying, “I’m going to take this trade, but if I lose on this trade I need to make myself real-world break even.” This trade has a risk of about $110, so if I lose this trade I have to go 10 straight days with no Mangino’s. I have to bring lunch from home.”

A real-world break even makes the actual dollar risk mean something and matter. Something small, but still — something real. Interestingly, the first time I did that, I did lose. I ended up eating tuna out of a can. I lost seven pounds. I ate tuna out of a can for 11 days straight to earn that money back.

I still took trades in the meantime. I remember another time I had to cancel my whisky of the month club membership in order to get that money back. One of the most nerve-racking trades was the first time that I bet my rent. If I blew my rent for that month I would have to find a side job to get it back. I ended up making money on that trade.

That’s where I developed as an investor. Then I met a guy named Mike Arnold, who’s my partner in the Stock Think Tank. Mike actually already had the same philosophy of looking at risk as the main part of the process in trading, which really is at the core of everything we do.

Losing all that money was a very big part of what we do now — learning the lesson of looking at trades from a perspective of risk first.

It’s a risk-reward calculation. We do these every single day. Risk and reward are inseparable. In the same vein any given stock can double, or it can half. If you see the potential for something to double, you first need to focus on the potential for it to be cut in half as well.

What I learned was, how is a trade financially wrong? How is this going to move too much in the other direction, to where it exceeds my acceptable level of risk? Based off that, we calculate the size of the position we can afford to take.

Then the next calculation is, does it have a comparable upside to the risk we’re taking? A 1-1 ratio or better, and if it is comparable we can consider taking the trade. That’s the lesson learned when you’re right but you’re still losing money. You need to lose to learn, but more importantly what you need to learn is where the cutoff is, that spot where your thesis is correct but the price action just isn’t agreeing with you. Now you get out and find another trade.

Size of position is what people misunderstand. They tend to think, “Percentage-wise this did really well,” but they’ve only put a small amount of money into it, so it doesn’t add up to much.

Doing that opens up the investment world for you. You don’t have to trade just Tesla because only Tesla moves. If you do that, well, you’re an idiot.

So how does this work in terms of  the Stock Think Tank? We have a 10-stock portfolio and we have five special plays that try to run alongside that portfolio. The risk profile of each one of those trades is exactly the same.

Now, the portfolio is not always full. But if at any moment we have 10 stocks and we have our five special plays, we’re 100% invested. In terms of the quantity of stock they’re all over the place, but in terms of the dollar amount of the position they’re exactly the same.

The risk on each position is the same no matter how many shares you have. Over the scope we’ve lost about 10% to 20% less than our allocated risk since March on all our losers. It’s been even better than that in the special plays portfolio.

We have stayed in things. We set price targets. When the asset reaches the price target, we exit.

We’ve had the portfolio since March 1st and we’ve repeated some stocks multiple times. We don’t have anything, however, that we’re still holding since March 1st. I don’t see us having held anything more than five weeks. The vast majority of them are held right around two to three weeks.

We send out an alert five nights a week. We always send it out, but sometimes the alert might be “No change.” There’s communication every single day, and it starts off with action to take.

Ultimately, subscribers get regular touches from us but I don’t want them to have to do a ton of work following the trades. Over time, the goal is to see the bottom line of their money invested grow as reward inevitably outpaces risk.

That’s what I really learned in the Chicago pits all those years ago: How to make real money trading. Not make a ton and lose a ton in one go but beat the system by understanding both sides of the trade, reward and risk, and by managing both sides of that equation intelligently.

Get My Free Tips